Melinda B. Wallace
Kamis, 19 Juli 2018
Facebook Twitter
Loading...
As empty nesters, we are easily overloaded by a full size cheesecake, so I have been experimenting. I finally got it down to six cupcake size cheesecakes which suits us perfectly.
These little guys ALWAYS turn out perfect.....no cracks, no sink hole in the center and they are smooth, rich and addicting!! 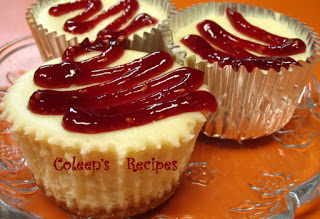 Place six foil (or paper) cupcake liners in a cupcake pan. Preheat your oven to 325°.
CRUST
1/3  cup graham cracker crumbs
2    teaspoons sugar
2    teaspoons melted butter
Mix together and split evenly between the six cupcake liners, and press the crumbs into a flat layer.
FILLING
8 ounces of full fat cream cheese (room temperature)
6 tablespoons sugar
1 teaspoon vanilla extract
4 teaspoons flour
2 large egg whites
Beat the room temperature cream cheese with electric mixer for three minutes. Add the sugar and beat for another two minutes.
Add the vanilla, flour and egg whites and mix until well incorporated, but don't over mix.
Pour the batter over the crumb crust, filling almost to the top (I use an ice cream scoop).
Bake at 325° for 25 minutes (the cheesecake should be just "set" and barely giggle when you tap lightly on the side of the cupcake pan.
Remove from the oven and let sit at room temperature about 20 minutes, then put in the fridge and chill for at least a couple of hours.
Before serving, I like to add a swirl of raspberry jam on the surface of the COLD cheesecake (any jam will work, see note below). 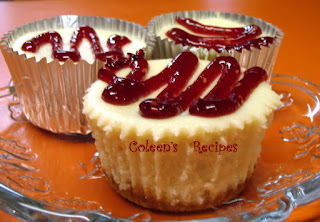 ENJOY !!!
Note:  I like to use the foil cupcake liners because they release the cheesecake so easily, but paper ones work great as well.
Note: Any jam or spreadable fruit works well in this recipe. To make the jam super spreadable, I just put a couple of heaping tablespoons into a small bowl and stir it vigorously until it is smooth and soft.

Note: I never seem to remember to bring the cream cheese up to room temperature, so I just put it in the microwave for 10-15 seconds (to take the chill off) and it works fine.
Loading...
Facebook Twitter