Melinda B. Wallace
Kamis, 19 Juli 2018
Facebook Twitter
Loading...
This recipe is a delightful combination of a brownie layer baked under a vanilla cheesecake layer; do I have your attention yet?
They are delicious and seriously going onto my holiday dessert tray this year. If you like chocolate (duh!!) AND you like cheesecake (double duh!!) you will love these quick and simple treats. 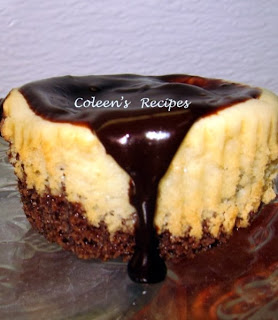 Brownie Layer
1 ounce semi-sweet chocolate
1/4 cup butter
1 tablespoon cocoa powder
1/2 cup sugar
pinch salt
1 large egg
1 teaspoon vanilla
1/3 cup flour
Heat chocolate, cocoa and butter (I use my microwave) just until melted, then stir well and set aside to cool while you do the next step.
In another medium size bowl mix sugar, egg and vanilla till smooth; add melted chocolate/butter and flour and stir just until it looks well mixed (I do this by hand - no mixer); set aside.
Cheesecake Layer
8 ounce cream cheese (room temperature)
1/3 cup sugar
1 large egg
1 teaspoon vanilla
Using electric mixer, beat the cream cheese until it is very smooth. Add the sugar, egg and vanilla and continue mixing until creamy smooth. 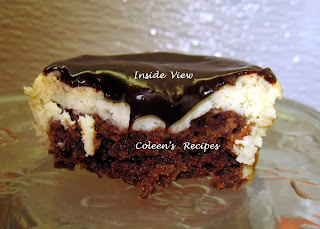 Preheat oven to 350°. Line cupcake pan with 12 foil liners. If you don't have foil liners, you can use paper liners, but you will have to mist them with a little vegetable spray.
Put a very lightly rounded tablespoon of brownie batter in each cupcake foil and roughly spread it around a little.
Top the brownie layer with the cheesecake mixture, dividing it equally between the 12 cupcakes. 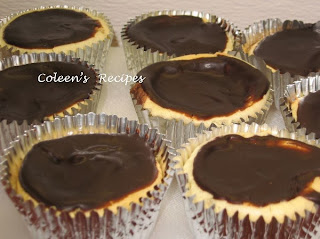 I topped these little gems with a ganache (but you don't have to).  To make that, I just mixed a large handful of chocolate chips with 1/4 cup very hot (but not boiling) heavy cream, stirring until thick and smooth.
These are also very pretty at holiday time, topped with cherry pie filling and a swirl of whipped cream; it's sort of an individual black forest cake idea.
Loading...
Facebook Twitter